With grateful thanks to Sonya Campbell, Customer Service Manager.

It was found that the large open plan floor plate was very challenging in that it is not very adaptable when they want to reconfigure for events, the ground floor is difficult with its fixed seats and floor boxes which are a nightmare. So they have bought study pod structures that the students.The lower ground floor is often used socially and it can get very noisy, so that staff members have trouble making themselves heard so they have given up on answering the telephone on floor. The Saltire Centre is open until 11 PM but a telephone helpline is available 24/7 for the library and IT support. They found that most students live nearby so they don’t need to be open 24 seven. 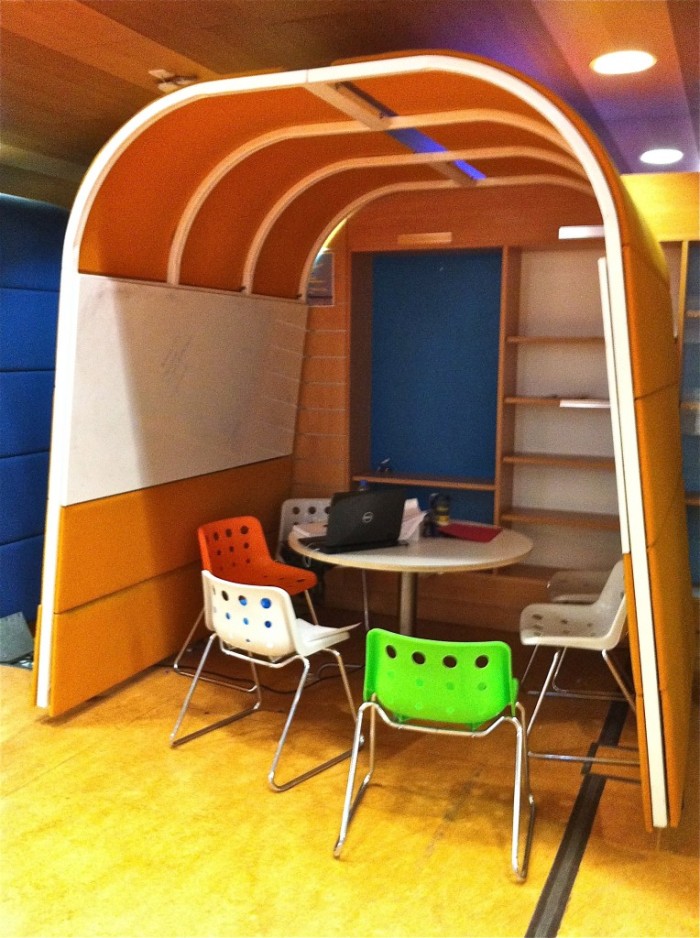 The quiet floors are a tricky issue as it needs to be policed for noise with students often chatting, however it is not a problem on the silent floor where there are signs are in red. The quiet floor has amber signage and the group study floor is green, the traffic lights system delineates activity and acceptable noise levels. 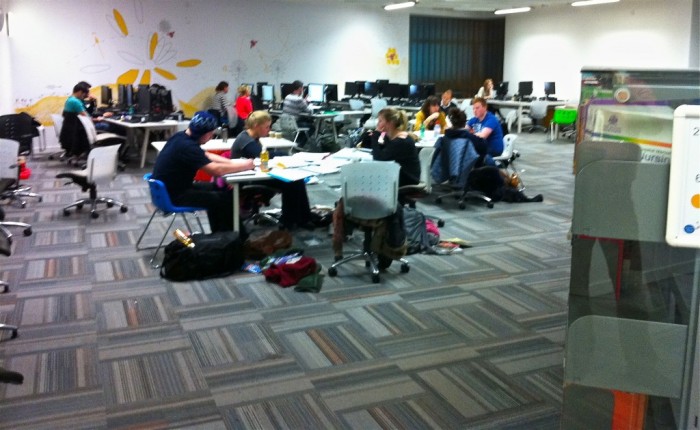 They took the library shelves down and created individual carrels together with group study pods with beanbags and large screens. The students like them and don’t have a problem with the public area, as a whole building is public and open plan so that the students don’t know anything different.

On the whole they have found that needed to make organic changes over the years as Estates department and the architects did not consult with local staff and just told them that this is where they were going to work and operate, so the emphasis was all about the student experience and not about the staff who would actually work there.

Staff were given a large Open Plan office area that is about 200 m² with no privacy screens, it is all very grey and similar to Call Centre.

The architects placed the all-important helpdesk behind a large concrete column underneath the bridge with a gangway overhead so its not a good position and was done with no consultation. 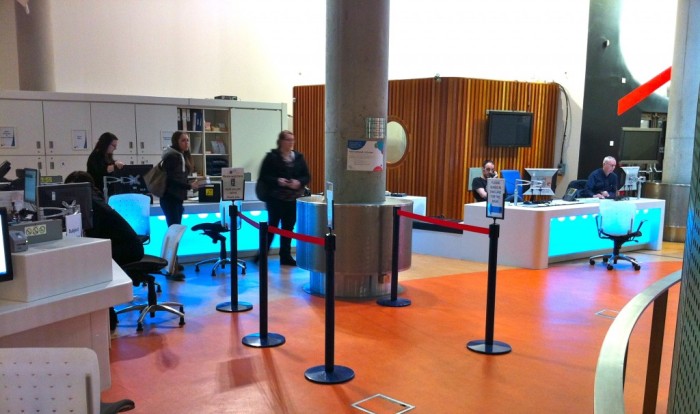 There was a noticeable lack of policing, with no one on duty at reception; the centre has a cafe and vending machines on the lower ground floor.

The furniture budget (and I presume the same is true for the technology budget) is not good; Sonya told me that they often take on second-hand furniture from elsewhere in the University.

They are planning new zones on the lower ground floor with free standing tables and chairs with central soft seating areas followed by more study pods for group work. They will have fixed tables to power in the floor.

Soft seating has power modules on all floors, with some having writing tablets for laptop use. The furniture is varied at different heights and size and colour.

The lower ground floor felt rather like an airport terminal, brightly lit from above with a large data projector and screen mounted on the ground floor above.

There are printing pods and book self issue pods dotted around the floors.

Sonya did have to tell some people to stop talking on the quiet floor.

The library shelf racking was by Nordplan; although it was expensive it was valuable in terms of space-saving. Students can operate the Nordplan shelving but they have found that book usage has ‘fallen off a cliff’, this is probably due to the lack of induction process on how to use the shelving. Apparently the service contract is excellent.

In case of students being trapped there are floor height sensors that stop the shelves moving.

I noticed the wall graphics brighten up the environment; they have them inside the printing and book self-issue pods.

There are well designed way finding columns but I wonder how often they are used. Sonya mentioned that on opening there was no way finding signage so the students were somewhat dropped in the deep end. 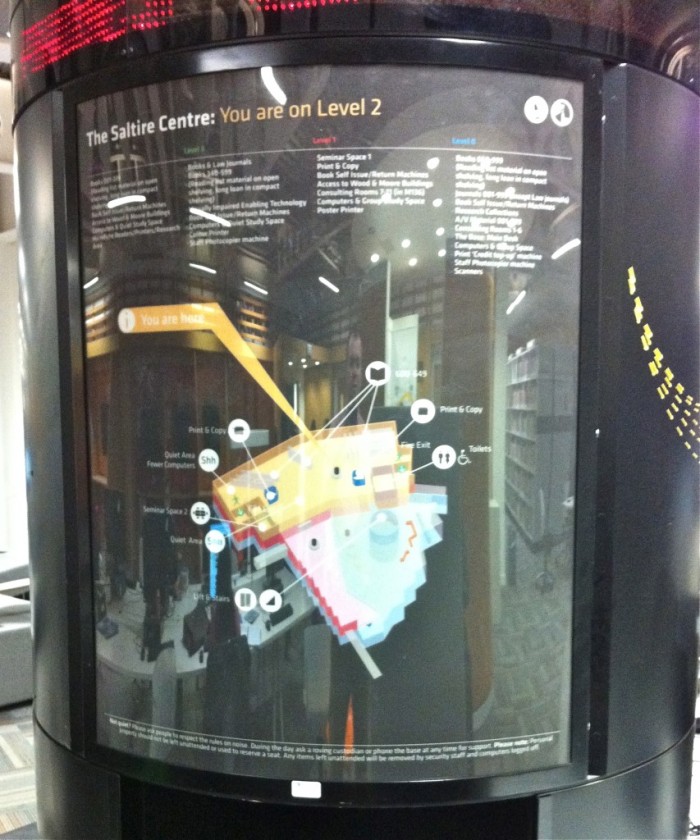 This was also true of how to use the whole building, Sonya talked about the transition from receptive teaching at school to a student centred independent learning approach, one that students had no real preparation for.

I noticed there were touch screen consoles for students dotted around, they were to reset their password and resolve login issues, complete with instructions in text above each screen, these were very impressive.

Architecturally, I saw that there large ceiling spot lights and reflectors, along with sound baffles to help with acoustics mounted in the ceiling voids.

They had nice wooden antique style coffee tables in between the soft seating and large conference style tables used in the silent study floor by students who were working independently.

There were however some very low tables used on the balcony breakout spaces with beanbags and standard height chairs, but I heard that these were not very well used. The tables were so low you could only use them if you are sitting on the floor itself.

In conclusion, Sonya explained that she encourages all staff to be conscientious, to see what needs to be done and to do with it themselves, they all take a holistic approach to supporting students at the Saltire Centre.

This site uses Akismet to reduce spam. Learn how your comment data is processed.